It seems that travel blogging is awash with Top Ten This and Seven Reasons Why That. And while some of these lists make interesting reading, I have to say, most of them seem fairly useless to someone of my ilk, namely a forty-something solo female traveller who is still slightly nervous but remains determined to explore her on own. The lists seem very much to be written by, and for, the gap-year generation or else the hardcore in-depth traveller spending months on end in a particular country. But if statistics are to be believed, there are more and more women like me who work full-time but choose to take trips alone.

So, not to be outdone, here are my tip top tips for a solo female tripster.

It’s great to be a free spirit and to go where your fancy takes you. But if you’re a forty-plus female travelling on your own with a limited amount of time and money available, then you really need to do your research. It’s no good rocking up for a four-day city break without a place to sleep and not having a clue where to go or what to do. For the sake of your safety and your sanity, do your homework. Book your bed, plan your itinerary, learn about the local transport, research your areas, read up on any well-known tourist scams.

I’m not saying stick to your plans rigidly. They are not set in stone – if you want to change your mind once you’re there, you can and you should. But there is nothing worse than wasting half your day trying to find the right bus or queuing for that must-see attraction because you didn’t book ahead. Worse still, you get there and it’s closed because it’s Monday (this has happened to me more than once).

Equally, there is absolutely nothing more rewarding than happing upon an unexpected hidden corner and instead deciding to spend your time there – that’s really what travelling solo is all about – pleasing yourself.  My itinerary for a recent trip to Bergen in Norway included an hour’s visit to Mount Floyen. However, once I reached the top of the mountain and discovered how beautiful it was, my multi-museum afternoon was quickly ditched in favour of a wonderful day walking the snow-covered trails and breathing in crisp air under beautiful blue skies. In fact, this turned out to be my favourite thing about Bergen.

On the flipside, I still remember the disappointing day I had on my first trip to Rome because I’d failed to prepare. I ended up having really bad pizza watched over by rude waiters who clearly thought I was going to do a runner because they asked me to pay my bill before I ate, and being wolf-whistled at by a van driver who also yelled “bellissima!” out of the window at me (sarky bugger). I don’t remember anything else about that day. An awful waste.

2. Be realistic; know your boundaries

In a similar vein, while it’s good to push yourself and your travel boundaries, don’t overdo it and stretch yourself too far. If you’re not confident about doing something, and you’re not good at faking it (I’m not), then for goodness sake, don’t do it. It’s normal to be a little bit frightened – that’s why we’re doing what we’re doing – but if your body language conveys absolute terror then you’re heading for trouble. How much fun is it to go to a place where you’re way out of your depth and feel miserably uncomfortable? Choose your destination wisely then walk tall, smile, swing your hair. Look like you know what you’re doing.

This one is more important than you’d think. Take a really secure handbag which goes over your shoulder and tucks firmly under your arm or crosses across your body, perhaps underneath your jacket. Keep a close eye on it at all times and keep your hand on it in crowded areas and on public transport. Don’t have a bag that can’t adequately carry all your belongings, make sure that you know where all of the various things you keep in your bag are and be are comfortable using it. Don’t be tempted to take a new bag that you’re not familiar with or one which does not have a zip and secure pockets.

Be aware that certain types of bags will single you out as a tourist (i.e. a rucksack). It’s fair to say that I’m rather dubious about the whole ‘trying to blend in’ thing. I always used to try to look like I belonged, with limited success (apart from Germany where I always get asked by German people for advice and directions) until I went to Japan. But there’s no way on earth you can look like a local there and I actually found it very empowering to be recognised as an outsider – the Japanese people seemed obsessed with taking my photo for me.

However, stranger or not, in certain places, it’s best not to deliberately advertise yourself as a target. So carry a suitable handbag, as you would at home, watch your valuables, dress appropriately and modestly.  Taking care of your belongings (don’t forget the normal advice of keeping copies of all your documents and splitting your credit/debit cards and cash), and keep your wits about you to make you much less of a target for scams, pick-pockets and worse.

4.  Watch out for the fellas

As an even modestly-attractive woman on your own, especially in a bar or restaurant, you’re always going to attract attention. Which is why it pays to know what you’ll do in certain situations. If you don’t want any attention at all then wear something that looks like a wedding ring and, if necessary, claim that your husband is at home/on his sickbed in the hotel/on his way to meet you.

That said, even the most independent and and introverted of us do get lonely sometimes and it is interesting to meet other people and find out their stories. 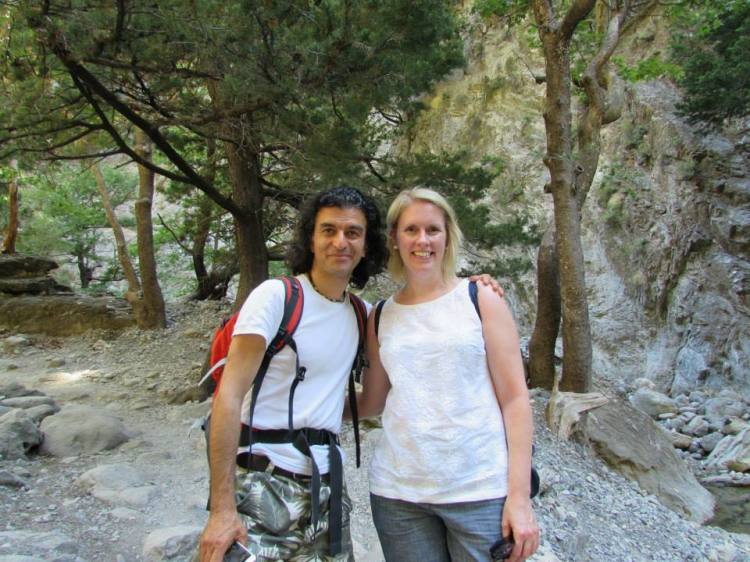 So if you’re interested in learning more about the guy who is paying you the attention then there’s no harm in accepting a drink in a public place – but make sure that there is waiter service to the table and keep your drink in sight at all times.

A tactic I use if agreeing to meet a guy later on is to let my brother at home know who I’m seeing and where I’m going and then find a way of passing this fact on to the guy during the course of our time together, i.e. “oh yes, my brother and I are really close. I tell him everything – I even told him I was coming out with you tonight”. Then once I’m home safe and sound I let my brother know.

I’m not trying to each you how to boil eggs but it’s natural when you’re in a strange place on your own to be tempted to do things that you wouldn’t do normally. So, even if it’s love at first sight, and you’re flying to the other side of the world the following day, don’t even think about going somewhere private with someone you don’t really know. By all means pass on your contact details. If they’re meant to be then they’ll be meant to be and you will find a way to see them again in the future. But you don’t need to put yourself in danger for them. Apart from the obvious rape and murder scenario, you could have your bag stolen, end up with an STI, get caught by his wife… It would be silly to ruin your trip for the sake of a guy who seemed like the real deal but, in fact, wasn’t.

Rule of thumb: if you wouldn’t chance it in your home city then don’t do it in a strange place. Take care in quiet residential streets, deserted corners of parks and the like. Wherever possible don’t walk alone at night. Take enough money to pay for a taxi should you need it. If you absolutely have to walk in dodgy areas, or after dark, then know your route beforehand. This is where Google maps really comes into its own as it gives you an idea about pavements, street lights, whether there are shops or cafes which will be open/closed, park areas, rural areas, alleyways. Walk purposefully, keep your wits about you and don’t meander, look lost or start trying to consult a mpa.  If you have to take public transport at night, use buses rather than trains if you’re not confident about your safety, and sit near the driver if necessary. If you need to ask advice, choose another woman, your own age if possible.

OK, lessons over! While I’m not trying to preach to you, equally I’ve learned over the past few years how to handle certain situations and how to limit my vulnerability meaning that I can concentrate on really throwing myself into enjoying my time away.

So, to sum up, it’s very simple. Relax and have fun but watch your back. Take precautions, not risks. And be prepared, not paranoid.