It’s another early start after a very heavy sleep.  Today I am taking the train half-way across Romania, from Bucharest to Constanta, a town on the Black Sea coast.

It’s actually pronounced ‘Constanza’.  The T has a little accent underneath it.  Unfortunately I can’t get my keyboard to do one.  Apologies.

Catching the train to Constanta is punctuated by a series of small challenges.  Firstly, finding the Gara de Nord, Bucharest’s main train station, then crossing the roads to reach it, navigating the station itself (which, in truth, was not as oppressive as I had been lead to believe) and then, finally, and most difficult of all, locating my seat on the train.  To cut a long story short, I have to enlist the help of a not-very-helpful guard who loses her temper with me and frogmarches me on to the train, ordering me to sit down, reproaching me in Romanian.  Ooooh, alright, keep your hair on!

So how did I come to be travelling to Constanta?

Put simply, there are limited options for organised tours out of Bucharest for a solo traveller in March and besides, I’m growing tired of  being loaded on to a bus and ferried about with people who annoy me.  Quite by chance I had happed upon something I decided I simply had to see with my own eyes.  So I had booked a ticket and was on my way to do just that.

The two-hour-plus journey is very relaxing and also extremely interesting with changing landscapes and contrasting scenery, passing through the backwater of Dobrogea and crossing the Danube river.

Time passes quickly and before long I arrive in Constanta.

Leaving the station, I follow my instincts and head for the sea.  Constanta, by all accounts, is a very bustling and attractive place with no out-of-towners wandering about on their own on a Monday morning in early March.  I like it for that alone.

Eventually I find the sea and decide to explore which is no mean feat since access to the beach is via a series of very steep and icy steps with no handrails.

Somehow I make it down to the beach without breaking any limbs.  Unsurprisingly, for such a busy place, there is no one around.  It’s not a pretty beach but I’m drawn to the vastness and the stillness of it.

I also like the snow on the sand.  It isn’t something I’ve ever seen before. 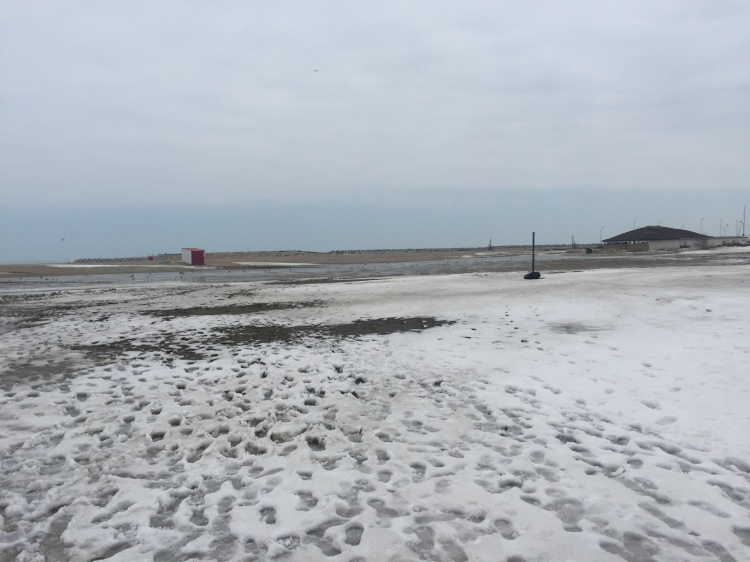 I wander about, enjoying the solitude and the crisp air – it’s cold but not at biting as in Bucharest, – lost in my own thoughts.

There is little to see on the beach itself but looking back at the town reveals its diversity.  Up above derelict buildings sit alongside modern, new ones and in the midst of all this mishmash, there is a mosque.

I spend plenty of time on the beach and walking around the sea wall.  The manmade bollards to reinforce the wall are full of ice created by the sea – an unexpected and somewhat surreal spectacle of nature. 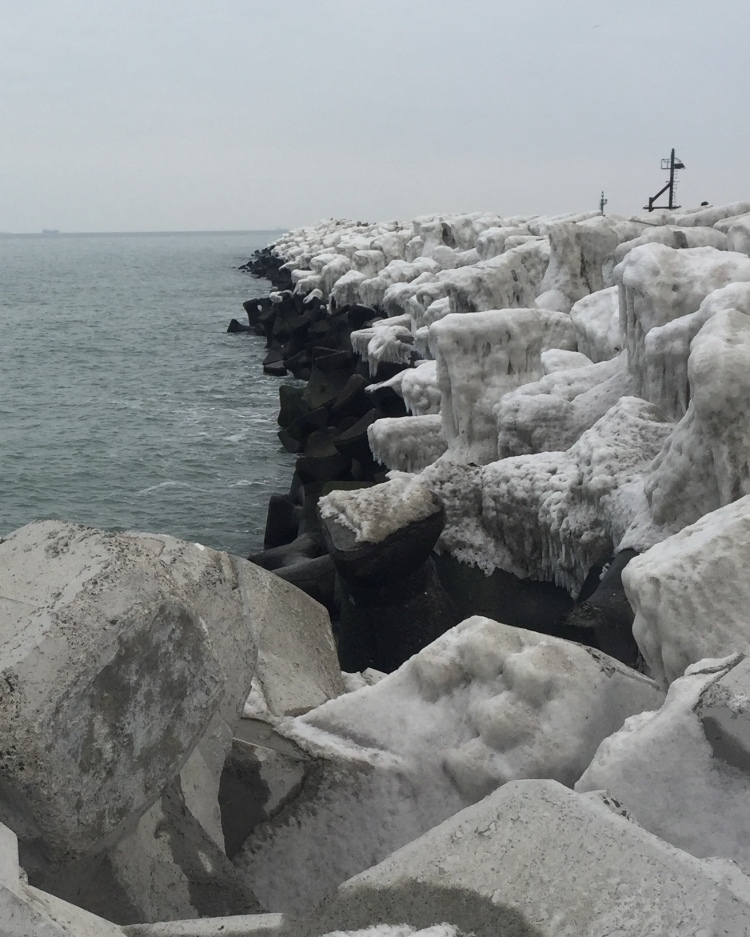 At last I head back across the marina and then along a modern and attractive promenade, rounding a corner which brings me to what I have actually travelled half-way across Romania to see. 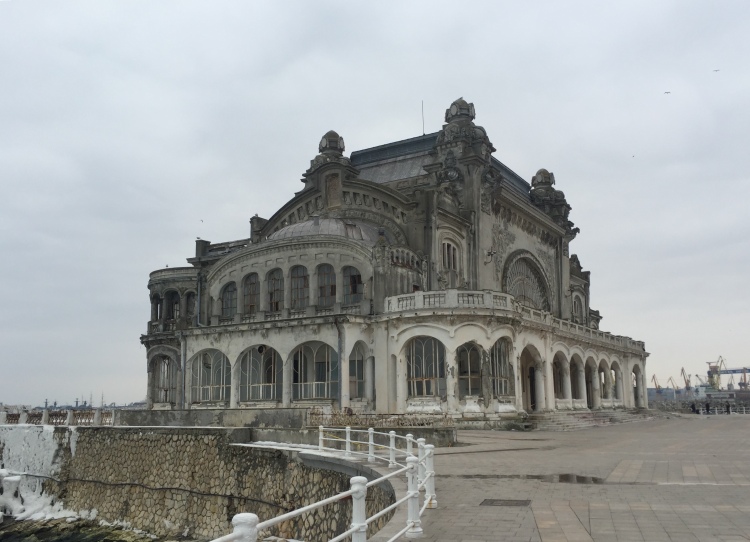 When I had first seen a photo of it quite by chance, I knew that I had to visit it for myself.  It was somewhere I felt a very strong pull to and I knew that it would be a special, spine-tingling place to be.

I was not wrong.

There are varying accounts of the Cazino’s history, and especially its construction, which seem shrouded in legends and secrets.  But it seems fitting that it has such mystique about it.  The only verifiable details I can find are that it was commissioned by King Carol I, built between 1904 and 1910, and in its heyday it was Constanta’s most-recognisable landmark (I would argue that it still is), being a place frequented by only the most well-to-do.  It was used a hospital during both World Wars and then became a restaurant during the Communist era, since gambling was banned under the constraints of the regime.

It closed in 1990 and has been waiting to be rescued ever since.

Obviously Art Nouveau, its once-majestic opulence is still apparent.  Its façade is decorated with marine-themed features, the most obvious being the fabulous clamshell-shaped windows.

I walk around it, as far as I can, for much of it is cordoned off.  Entry is forbidden but I know from photographs on the internet that its interior has been visited in the past few years, though only by special permission and at the photographers’ own risks.

Taking it in in its entirety – the details of it as it was first created – and what it has become since being left to its own devices – the crumbling stone, the rusty metal, the peeling paint, nature and the elements taking over, I picture it as it would have been – illuminated, animated, full of life, excitement, hubbub. 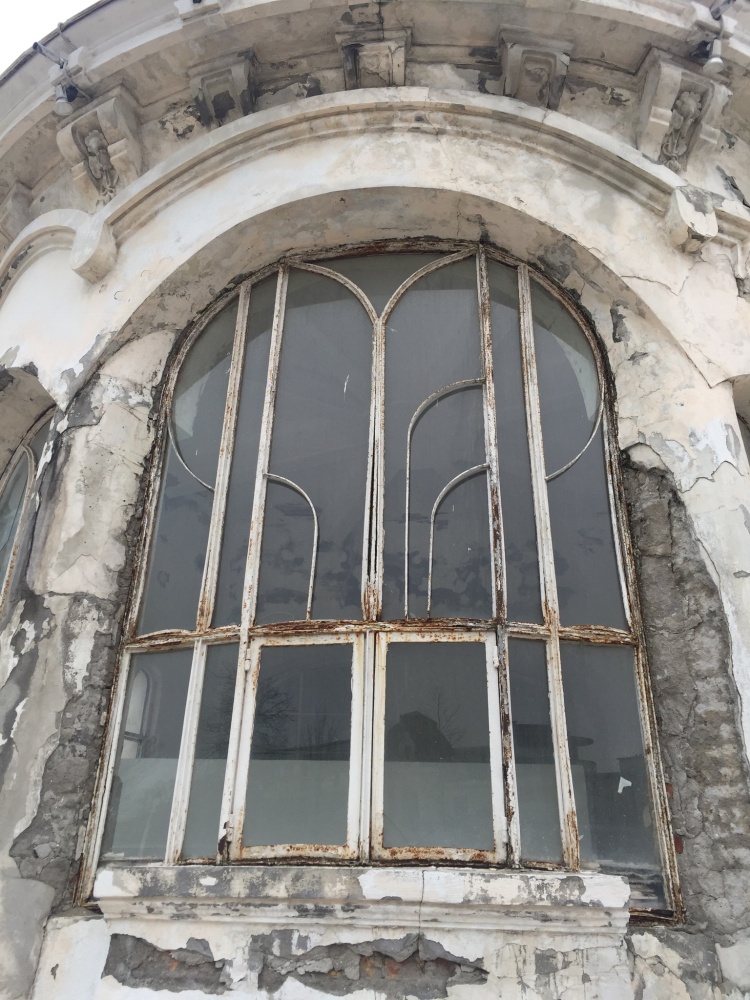 But I prefer it as it is now.

I don’t want it to be brought to life.  It seems somehow fitting that it is shrouded in tragic beauty.

I spend a long time sitting with it in its silent sadness, staring out to sea.

I shed a couple of tears.

The rest of my time in Constanta is fairly low-key.  I have a lazy lunch and then hotfoot it on the train back to Bucharest.  I meet a nuclear physicist on the train.  As you do.  We chat a little.  He’s a nice guy but I want to spend some time in quiet contemplation, thinking about the Cazino.

Right now I’m on my way back to the bright lights of Bucharest.  Tomorrow I will return home to my teeny tiny dolls’ house and my teeny tiny insignificant life.

But the Cazino will still be there, waiting to be rescued – renovated, redecorated, recreated, reinvented.  Remembering its faded youth, a shadow of what it once truly was, I somehow felt a strong connection with this sad soul, sitting silently by the sea.

2 thoughts on “Cross country to Constanta”